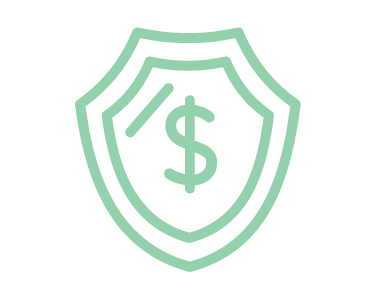 Companies are generally funded by some combination of bank borrowing and shareholder funds. It is rare for banks to lend funds to a company unless the shareholders have some of their own money invested.

Share capital and shareholder loans have different features which need to be considered when setting up a company and also as companies evolve overtime.

Share Capital
The term share capital describes funds put into a company by an investor in exchange for shares. As such, the investor becomes an owner/shareholder in the company.

Investing funds in exchange for shares is generally a formal arrangement with supporting paperwork.

Shareholder Loan Accounts
Shareholder loan accounts record funds lent to a company by a shareholder as distinct from funds invested for shares. For example, if a company needs funds to purchase an asset, the shareholder might lend the funds to the company rather than taking up more shares (share capital) in the business.

Typically the balances of shareholder loan accounts move up and down over time in much the same way as a bank balance moves up and down.

In companies where salaries are credited to the shareholders rather than being paid via the payroll system, the salary credit increases the shareholder loan account and the cash is drawn out over time.

Share Capital vs Shareholder Loan
There are various considerations associated with deciding whether to record funds invested in a company as either share capital and/or shareholder loans. The table below sets out some of the considerations: 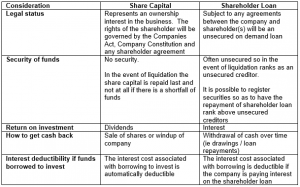 This flexibility however needs to be weighed up against the other factors. For example, if the shareholder is borrowing the funds to invest and these funds are put in as a shareholder loan, unless they get interest back on the loan, it is unlikely they will be able to claim the interest cost in their tax return. In this situation, share capital might be preferable because there is an automatic deduction for the interest cost incurred.

We suggest seeking advice before investing in any company as to the possible implications.